As promised here are a few of the images from the outrage conference on Wednesday... 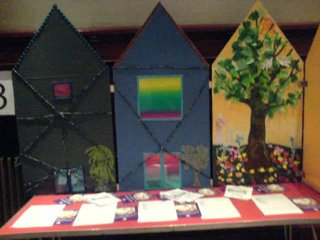 Above is a work entitled Sadness to Sunshine by the Disability Resource Centre. 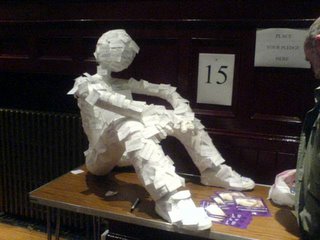 The above work is titled S.E.A.N. (Somebody, everybody,anybody, nobody) by the Star project and Renfrewshire Women's Association. This particular art work is interactive, on the way into the conference the delegates were given a sticker with the phrase ....

'I Pledge, Never to Commit, Condone or Remain Silent About Violence against Women.'

Each delegate then signed the pledge and attached it to Sean, it was an excellent idea and very well done.

CHRISTMAS FAYRE
Paisley Grammar PTA organised an excellent Christmas Fayre for last night, despite the howling winds and the severe weather warnings it had an excellent turnout. The stalls included the students selling an array of items including small Christmas cakes (one of which my mother bought) and Christmas cards. Among the stalls I have to give a special mention to the Disability Resource Centre Art Group, the art work was exceptional and I never fail to be impressed by their work, congratulations to all involved.
The night was a big hit, and although I could not stay for the raffle at the end I had an excellent time and I hope that it raised a lot of money for the PTA. The organisers are to be congratulated, and the students deserve a congratulations too for all their efforts.
Posted by Rayleen Kelly at 10:23 am 2 comments:

This marked the biggest overhaul of domestic violence legislation for 30 years.

This Labour Gain fits in well with the start of the 16 days of action for the elimination of Domestic Violence against women. The Outrage conference in Renfrewshire on Wednesday was the hopefully the start of a Renfrewshire Wide consciousness on this issue. The Domestic Violence, Crime and Victims Act also covers domestic violence by women on men which is equally as serious, I was grateful to be invited on Wednesday and delighted to be there a big congratulations should go to all of the organisers for a very successful day.

Posted by Rayleen Kelly at 9:52 am No comments:

The Glasgow Airport Rail Link (GARL) bill was going through it's final phase in Parliament this afternoon and was accepted by 118 votes to 8 with no abstentions. Local Labour MSP Wendy Alexander welcomed the SNP support to the progress of the bill, but pointed out that someone should really tell the local SNP as they have campaigned against the link and continue to do so.
The Local Labour Administration of Renfrewshire Council have argued all along that the pitches at the Race Course (St James Playing Fields) were of prime importance to the people of Renfrewshire, while the local SNP led by the likes of Bruce McPhee list MSP and his protege Cllr Derek McKay led a campaign to stop the Rail Link. The Chair of the Local Football league is quoted as saying that 'Christmas has come early for the St James Playing Fields'. The Local SSP have also said that they are against the bill progressing, I don't have the voting records for today's vote but in June of this year they did vote for it!
Posted by Rayleen Kelly at 9:44 pm 2 comments:

THE GOAL OF FULL EMPLOYMENT

The fact that when I was growing up in the 1980's Full Employment was seen as a myth in political and practical terms tell you a lot about the Tories and their policies, we now have it in our grasp thanks to a Labour Government in Westminster and Holyrood!

Thanks to Mr Handy for this! This is the first time I have put one of these You Tube things on my blog so lets see if it works?
Posted by Rayleen Kelly at 3:01 pm No comments:

OUTRAGE
Renfrewshire Against Gender Violence
Today I was lucky enough to be invited to the first Outrage conference which has been organised by Renfrewshire Women's Association it is part of the 16 days of action for the elimination of violence against women which is being held internationally. I am writing this while waiting to go back over for the second half of the day but, this morning was fantastic, the Beechwood Women's group were fantastic and their drama had quite a few of the audience in tears. When I went outside at lunch there were a few of the audience talking about the morning session and they seemed to be thoroughly enjoying it, similarly brilliant was the Women 4 Women Group, many have experienced the issue of sexual and physical abuse and they gave an audio presentation which was outstanding.
This afternoon it is the turn of a very talented young actress called Naomi Breeze who does a one woman show about domestic violence from the individuals perspective, the first time I caught the performance we were not told that it was a drama presentation and it was like a woman just telling her story, very powerful and you get the chance I would definitely go see her.
Also this afternoon is the Women and Children's First project, Choose Life and RAMH as well as closing remarks from Community Learning and Development. I will update later (hopefully with visuals of the art work also on display) on this afternoon's presentations.
Posted by Rayleen Kelly at 1:27 pm No comments:

LOCAL?
I have never thought that people should vote for someone JUST because they are local, it is not something that the Labour Party support, local people can have a greater knowledge of the problems but it does not follow that they would necessarily be better for the ward, we do support the best candidate and if they happen to be local all the better.
The SNP use the LOCAL card a lot however, their candidate Tracie McGee from Howwood suggested at the last election that because she lived in Johnstone Castle and the Labour candidate Cllr John Hood only lived in Johnstone that people should not vote for him as he was an outsider! I wonder if she has changed her mind now she is the one standing for election as the 'outsider'. (this is how Ms McGee referred to Cllr J Hood in her election materials)
The Tories are at it as well and in the local rag this afternoon their candidate is being threatened with legal action by the local Pharmacist (I am sure you will agree an integral part of the village) for trying to scare residents by suggesting that the local Methadone programme is being improperly run and that it should be shut down. Keep in mind there have been no complaints from Strathclyde Police and they have dismissed the claims. The candidate is obviously trying to stir up an issue without any evidence to back it up, you can make up your own mind if this is normal in your area.
I think that the candidate who most reflects your views and has your trust should get your vote, I think that John Caldwell will do an excellent job for Elderslie and will carry on the excellent work that the Late Deputy Provost Jean Goldie started. It has been well known that Jean LOVED Elderslie and at times it was difficult to have a conversation with her where it did not get back to Elderslie, to her credit she worked extremely hard for her constituents and was extremely well thought of! I am sure that John will carry on this tradition of having a strong and representative Labour voice on Renfrewshire Council.
VOTE LABOUR, VOTE CALDWELL ON DECEMBER THE 7th!
Posted by Rayleen Kelly at 3:10 pm 2 comments:


Previously I had written about Elaine Murray MSP and her efforts to shame HBOS into paying more money into the Farepak fund, today is the turn of Jim Devine MP. Mr Devine has been involved with this from the very beginning and his efforts are to be congratulated, in todays Herald newspaper it states that he has had a response from HBOS re their credit management procedures, and has asked for further information on what these actually are and how they were applied to EHR and Farepak.
In the same article it tells of how reps from Kleeneze have condemned the actions of EHR the parent company to both Farepak and Kleeneze for their actions in this matter.
The main point here is the one that I have hinted at in the earlier post, that HBOS got most of their money back, it was the ordinary woman/man on the street that lost their savings! I do not think that it is too much to ask for HBOS to be significantly more generous than they have been with regard to the fund do you?
Posted by Rayleen Kelly at 1:04 pm No comments:

This brings to mind a conversation I had at the last election in Paisley Town Centre, with a couple of senior ladies, it went along the lines of the Monty Python 'What have the Roman's ever done for us?' sketch! When I pointed out the free TV licence the Winter Fuel Allowance, the increase in Basic Pension, the minimum income guarantee and the Pension and Savings Credits they got the point. Today's Seniors are demanding more and more and they have found their voice thanks to this Labour Government, they will continue to do well, why endanger this by voting SNP, Tory or anyone but Labour at the next elections?

Posted by Rayleen Kelly at 12:21 pm No comments: 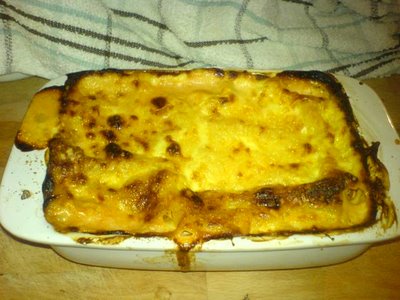 My sister has been kind of teaching me how to cook, I am now getting to the stage of adapting her recipes so after my first successful lasagna I am now making the same dish only with chicken! So the recipe remains the same.
Nightmare though that I keep burning my hands on the oven tray! I know I should wear the oven gloves but I can never find them when I need them.
Just so just for the reader who I met this morning I will take a photo of it and put it at the top of this post when it is ready! Probably not the graphics you were looking for but I will continue to try!
I promise it tastes nicer than it looks!
Posted by Rayleen Kelly at 9:02 pm 2 comments:

Despite the claims of the Tories, SNP and others the fact that 84% of the NHS staff are DIRECTLY involved with patients shows the investment in the staff in the NHS. Again it is not perfect but it is an excellent start.

Posted by Rayleen Kelly at 2:16 pm No comments: