MOLLY AND BESSIE THE WONDER DOGS

In February this year my mum and dads dogs as shown below were on the BBC Scotland website as I sent in a photo of them in the heather at the Glennifer Braes. Well this week I sent in another photo (which is shown on this website below the top photo!) and they printed it so the girls are famous again!

Check it out here (photo number 10)
Posted by Rayleen Kelly at 10:09 pm No comments:

My dad got into trouble a wee while ago for suggesting that there was an anti gay bigotry in the SNP after the Mormon SNP MSP Brian Adam (who is also the Convener of the Standards and Public Appointments Committee) arranged to have interns for the Scottish Parliament provided by the Mormon University Brigham Young. Now just in case you don't know the Mormon religion was founded by a man called Joseph Smith who based the religion on a 'visitation' from the Angel Moroni. My dad got in trouble because he made a joke and instead of saying Mormons he used morons (although on the face of it the religion should have been called the moron faith based on the angel Moroni's name!) This same joke is made in Angels in America the American drama.

Well as it turns out the SNP are at it again apart from Fergus Ewing MSP (SNP again) supporting the actions of a rogue number of Firefighters who refused to hand out fire safety advice at a gay pride rally in Glasgow, the other SNP MSP at it this week is Roseanna Cunningham. In the Scottish Parliament this week the antiquated adoption laws were being updated and Ms Cunnigham suggested that she represented the majority of Scottish voters in that she advised that she did not see 'how overturning tens of thousands of years of natures design moves us forward.'

For me it begs the question is Ms Cunnigham suggesting that there were no gay people thousands of years ago? If so where is the empirical evidence to support this? The reason this will not be answered is that this evidence does not exist. I am not suggesting that any religion is any better than any other or that the Mormon church is alone in this bigoted view, unfortunately the Catholic church is just as bad, in fact worse as their representatives wrote to each elected representative to try and guilt the MSP's in the name of God to vote against these proposals.

I feel as a Catholic extremely ashamed of those people who assume to speak on behalf and it is for me yet another reason religion should not be involved in politics. The problem? The church in whatever guise is not a democracy it is a bunch of middle to old age (I apologise to the young priests who know me) making decisions on a book that is supposedly over 2000 years old!

Have a look at the Herald newspaper article and my fathers webpage for more information.
Posted by Rayleen Kelly at 9:15 pm No comments:

I was delighted to be invited to attend the 25th anniversary for Glentanar Court sheltered housing complex on Thursday evening. The residents were all gathered in the common room and the festivities were under way, I was introduced to a number of residents and they were all very happy in the complex. The warden is according to the residents absolutely fantastic, and from watching her tonight I could honestly see why. They had gifts for the oldest resident who is around ninety one! As well as gifts for the two residents who had been there the longest, both had been there 25 years, since the complex opened and both have seen many changes in the complex, but all agreed that it is an excellent place to live.

I just wanted to put on an entry to say thanks to the residents for their invitation and for the lovely evening.
Posted by Rayleen Kelly at 8:01 pm No comments:

I was lucky enough this afternoon to be able to sit in on the Lifelong Learning and Work policy board. Despite the new buildings and facilities for the pupils of Renfrewshire the SNP are still talking them down, they are tyring to find ANYTHING wrong with the schools in order to say to the electorate, 'it would be better under an SNP administration'. I thought that it was important to point out here that under an SNP administration this Council would be bankrupt!

None of the motions they bring to the full council are costed, at the last budget meeting in February of this year the SNP proposed that the council CANCEL the PPP project, this would have cost the Council £19 MILLION, I wonder if the people of Renfewshire think this is a good way to spend the money? Keep in mind the SNP did not have an alternative at this stage for building the schools and upgrading the school estate, it was simply do it from existing council budgets! This would have meant wide ranging cuts.

The problem with the SNP locally is that their tactic is to say bring this back to us, don't do that, give us more money. They refuse to work within the grants the Scottish Executive have given the council and their solution is to ask for more, yeah cause that it going to work.
Posted by Rayleen Kelly at 7:34 pm No comments:

My mum and dads generation had Kennedy and the question where were you when he was shot? For my generation there are a few of them, when I was a lot younger it was where were you when challenger blew up? My answer was in Room one in the Primary School watching the launch on the Television, I remember it although I must have been about 10. When I was older in University the question became where were you when Thomas Hamilton entered Dunblane primary and shot and killed 16 children? My answer I was in my local primary school gym hall with Primaries one to six teaching them the music for the primary three first communion.

Then five years ago yesterday it became where were you when the planes flew into the World Trade Centre? I remember being in my boyfriend of the time's living room getting ready to go get him from work for a late lunch. I remember watching BBC news 24 and seeing the footage of the first tower in flames, I called and let him know and then went back to watching as I got ready, about five minutes before I was due to leave the second plane hit the second tower, by the time we reached lunch the reports were coming about the other planes, the Pentagon and fact that all flights had been grounded. We sat in amazement and watched as the buildings eventually collapsed and we, along with many other people who had poured into the pub when they heard the news, stood and watched the horrific events.

It is good that five years on people still remember and pay tribute to those who have died, and although I didn't know any of those who lost their lives I know that they will linked to all of our lives for a long time.
Posted by Rayleen Kelly at 4:46 pm No comments:

BEAUTIFUL RENFREWSHIRE
As you will notice from below I have mentioned my parents dogs before and even put on photo's of them, as the SNP locally are constantly talking down Renfrewshire I thought that this would be a perfect place to show what they are talking down.

The photos show Molly and Bessie in the pond in Renfrewshire, at Erskine beach and of course in the safety of their living room. 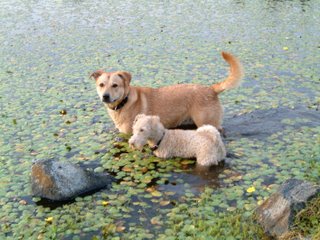 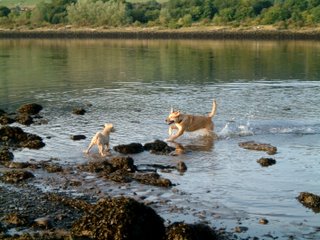 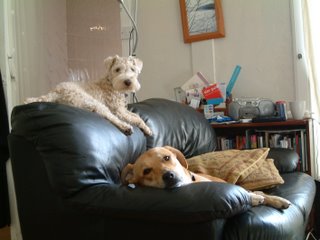 I know they look sweet, but they are fiercely loyal and protective of one another, they are also the sweetest dogs on the planet, as long as we think you are OK, or as long as you are not the vet with a big needle! They enjoy barking, fighting with each other and chewing my trousers when they are in a play mood and I am walking across the living room!
Posted by Rayleen Kelly at 9:39 pm No comments:

Well it has taken me the weekend to recover from the Full Council meeting on Thursday, it was a marathon agenda and a marathon meeting. The SNP did not put forward their normal plethora of non scensical motions, however there were some!

The two things the parties did agree on were that the council agreed to lobby and do everything possible to keep the identity of Paisley linked to the local University by urging the University not to change it's name. The second motion was moved by Cllr Harkins and Cllr Williams of the Labour group asking that the council donate £10,000 to St Vincent's hospice after their garden was damaged by vandals earlier this year.

The SNP however did not disappoint, when discussing the motion I moved on the Boundary Commission's proposals for the new boundaries in 2007, the SNP deputy leader Cllr B Lawson suggested that the 'Labour Group proposal' (also know as the Council's proposal as it was passed by full council on more than one ooccasion) was and I quote 'a dogs breakfast', his group also suggested (despite my specifically stating the opposite) that I was attacking the Boundary Commission, which as usual is ridiculous. However the best is yet to come, Cllr Martin the SNP candidate for the 2007 First Past the Post election in Paisley South, advised that there was little difference between the SNP proposal and Labour group proposal for the boundaries and that both were just as good and better than what we had been given! What is the official SNP line I hear you ask? Well if you find out let me know, I did suggest they go back and confer before speaking again!

The SNP locally are in tatters! They have no idea which way they are facing, and their behaviour is getting worse! Cllr McKay (the group Leader for the SNP) is letting them run riot, maybe it is because he is too weak to control the likes of Cllr Mylet who was at his worst again! I mean the man cannot even dress himself! He came in jeans, t-shirt and trainers with the t-shirt inside out and tried to suggest it was designer until one of his own group advised that they could see the label on the outside!! He ranted on at the Chief Executive of the Health board and never quite got to asking a coherent question and then for the rest of the meeting made snide remarks at ANYONE who spoke.

It is strange that the majority of the people who vote SNP do it blindly they obviously do not know the people they are voting for, and they obviously do not know their record, I mean would you vote for a local representative who see's fit to attend less than 30% of meetings? Despite only being put on only ONE specific board planning and transport? I know I wouldn't!
Posted by Rayleen Kelly at 8:52 pm No comments: