Recently in the Paisley Daily Express there has been coverage of the local elected members mobilising the community over the proposed change of name for the University of Paisley, to the University of the West of Scotland. It should be noted here that it is the Labour MSP's and MP's that are fronting this campaign, to date the other parties have not commented, the SNP don't even think it is important enough to put onto their website! While the Local MSP Wendy Alexander has lodged a motion with the Scottish Parliament...

To be fair Mr McFee of the SNP has also lodged a motion asking that the university bosses include the name Paisley in the name change! So for the SNP the University of the West of Scotland and Paisley would be fine!! Taking the mick much Brucey? While the SNP motion has one supporter (another SNP member) the Labour motion has support from the Liberal Democrats as well as other Labour Members!

Let us challenge the SNP to get involved and I don't just mean putting up a non sensical motion to Full Council on the subject, that might mean something if they were actually involved, sign the petition and encourage others to do so! And if you are going to put up a motion to full council try making it mean something, have an action not just a rallying call!

As an alumni of the University of Paisley and a Local Councillor for Renfrewshire Council I am appaulled by the University Court's suggestion and I have written to the Vice Chancellor to ask him to reconsider, I would urge all of you who are graduates of the University to do likewise!
Posted by Rayleen Kelly at 3:16 pm No comments:

This is Bessie and Molly! 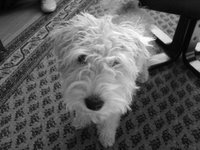 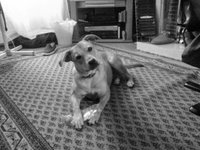 As per a previous post I am putting on a photo of my mum's dogs Bessie is a pedigree Lakeland Terrier although I have heard her referred to as a Lakeland terrorist (she barks at everything and nothing!) and Molly is a rescue dog, a Labrador/Staffy cross and she is the sweetest most adorable dog in the world! I cannot imagine why anyone would have wanted to let her go! Staffy's get a bad reputation but they are commonly known as the 'nanny' dog because they are so good with kids. I would encourage ANYONE who wants to get a pet to go to their nearest animal shelter and ask for advice you never know you might even get one as cute as Molly!
Posted by Rayleen Kelly at 1:19 pm No comments:

I have just found a new site which is called bloggers4labour it is an excellent site which allows you to see the blogs from a full range of Labour Politicians.

Scotland is under represented so if you have a positive Labour Blog get it submitted, I have!

As a Local Councillor I will be putting more and more posts on here that are positive news stories for the Labour Party, the reason? Because locally the press are all about if it bleeds it leads and as such they are not interested in printing good news stories they do not want you to know about the positive things that the Labour Administration on Renfrewshire Council is doing, good news doesn't sell as many papers!
Posted by Rayleen Kelly at 12:49 pm No comments:

My Loves and Hates

I LOVE MY PJ'S

Someone at work today was going through a list of their pet hates and it made me think of how positive a person I really am! People tell me this all the time but I never believed them until I thought about what my pet hates are and the only thing that really annoys me is when my political opponents attack me on a personal level because they can't think of anything political to attack me on! Actually that is nonsense I actually quite like that because it just shows that I have won the argument! Drivers that go along the inside lane of the motorway when they know fine well it is closing and then indicate to get in annoy me! But that would come under the common courtesy!

My favourite things in the world? My PJ's there is nothing better than coming home and knowing that you don't have to go back out again, getting into your PJ's and settling in for the night! I also love it when you get caught in the rain and are soaking wet and get in put on your PJ's and sit in front of the fire! I LOVE my mum and dad's dogs Molly and Bessie (I will add a photo on a later post) and the way they are so happy to see you when you come home! Even if you were just out at the car to get your coat!

I would urge everyone to make their own list of things that they are thankful for and the things that you like most!
Posted by Rayleen Kelly at 11:07 pm 1 comment:

I probably shouldn't write this but as it is a personal opinion I can't see how it will affect anyone really. I have noticed that locally in Renfrewshire there has been at least one journalist who has been pretty much losing the plot! All of the articles this journalist does are against the Labour Council, all of them are based on a press release by a single issue group (it changes week to week which one it is) and each article they write are purposefully one sided and incorrect.

I always thought that journalists were supposed to be impartial, it doesn't matter which side is right you report what you uncover and let the reader decide! OK a bit naive I know but more or less that is what journalists do as long as you know their bias you can figure out what is real and what isn't! Locally some of the journalists have lost the way in this regard but ultimately it is down to the editor and herein lies the problem.
Posted by Rayleen Kelly at 10:13 pm 1 comment:

There is a lot of talk on the national media about the airlines starting to use racial profiling as a tool for searching people at the airport. When they say they are going to start using it as a tool it gets me a little confused, they have been using it as a tool unofficially for a number of years, the fact that if you are Asian you are more likely to be stopped and searched at an airport is well documented, the fact that if you are black and in America you are more likely to be pulled over by the police is similarly documented.
I admit to having a problem with the use of racial profiling as an official or unofficial tool for stop and search inside or outside of our airports, why? I believe that using this as a tool plays into the hands of the terrorists, if the Muslim community feel that they are being victimised (which they would be by this action) the terrorists are more likely to recruit more people who feel a genuine grief towards the society they live in. I have nothing against criminal profiling in the physiological sense there are times where it is helpful, for instance in a local case here in Renfrewshire seven years ago a young woman was abducted, raped and murdered and in order to find the killer the police force used a number of these physiological tools and they were right every time. Racial profiling was not used as it is not useful in detecting crime it is racism plain and simple.
Posted by Rayleen Kelly at 7:43 pm No comments: