I remember from my studies in University that the SNP were the reason that the Conservatives and Thatcher got into power in 1979. They supported the Tories and were given the nick name 'The Tartan Tories' they helped bring Mrs Thatcher to Scotland and as recently as last year Mr Salmond suggested that the only reason Scotland didn't take to Mrs. Thatcher was down to her Social Policies, he was ridiculed then and deserves to be again today.


Today the SNP jumped straight back in to bed with the Tories at Holyrood, I think their side of the bed was even still warm. They voted for a symbolic motion to dissolve the UK Parliament. Personally I think those that voted for it should go back to a Standard Grade Modern Studies class and learn about the powers of the Scottish Parliament and it's scope of influence. It is almost as bad as the motion put to the Full Council in Renfrewshire by the SNP heavy weights Mylet (who had an attendance record of about 33% at Committees and Council Meetings) and McKay (now their fearful leader)...

10. Notice of Motion - Submit notice of motion from Councillors Mylet and Mackay:-

Now as much as I like helping with homework I firmly believe that the SNP should do their own instead of trying to get others to do it for them! This was grandstanding at it's worst and the motion today was the same.


I know that the scandal over expenses has blinded the public to the good that the Labour Party has done in power and I understand that not all of the work has been fruitful, there have been mistakes made but Government is made up of ordinary human beings and human beings make mistakes as a nation we are much better off for the Labour Government than we realise. As a Scottish Nation we are miles better for the Labour Government and are paying the price for the SNP in power through the slashing of Council budgets.

We need to take power back, we need to prove that we are worthy and we need to show that we can handle it, I think we are going in the right direction and am proud to admit I am a Labour Party member, come on all you hiding under the couch come out and start spreading the positive message that the Labour Government is a force for good and equality in our society.
Posted by Rayleen Kelly at 8:26 pm 1 comment:

Listening to the radio this morning while getting ready to go to work I heard a story that Alex Salmond Scotland's First Minister was making a trip to London to participate in the business of dissolving Parliament. Angus Robertson the SNP leader at Westminster rejected claims that Salmond should be in Edinburgh voting saying that they were not going to play politics.

Unfortunately for Mr Robertson and Mr Salmond I can't help but think that the ordinary public will be thinking that this is exactly what they are doing, the vote in the Scottish Parliament today was to modernise Scotland's rape laws. How the dissolution of the UK Parliament trumps the Rape laws of Scotland is beyond me and I am sure it is beyond every rape victim in Scotland.

It angered me to hear that Mr Salmond, Mr Robertson and the SNP thought that the vote on the dissolution of Parliament was more important than the bill he announced in September 2007. They were not just playing politics they were blatantly flaunting the fact in the face of every rape victim, every family member of a rape victim and the general public as a whole, it was disgusting, arrogant and self aggrandising, but then again nothing less than we expect from the SNP and Mr Salmond.
Posted by Rayleen Kelly at 9:38 pm No comments:

In Renfrewshire our electoral slogan is 'No Vote, No Voice'. I have repeated this quite a few times at work over the last week or so to those in my work who advised that they did not vote in last week's European Elections. When I voted around 8pm last week only 94 people had bothered to come out to vote at my polling place?!?
Part of the reason I get so upset by the whole not voting thing is that when I was young we had a real life suffragette living upstairs, in the warm weather she would come down into the communal garden and sit and tell us stories of when she was young. It really does make you realise how far we have come when you think about it, in my life time I knew a woman who was unable to vote because she was a woman. I used to think my mum and dad must hate this cause she is telling us about throwing toffee hammers through windows and chaining herself to railings, in reality my parents were incredibly proud to be her neighbour and her friend.
Don't get me wrong I understand the controversy over expenses and I understand why people are upset by this, my understanding however stops when I think that people think that voting BNP is somehow a reasonable alternative? It stops when I think about the gains made by the Conservatives and the SNP despite being caught in the mire as much as the Labour Party? I know we are the party of Government but surely it would take the collective will of Parliament to change a system such as the expenses and none of the main parties did very much to try and bring about this change.
The leader of the SNP is caught up in the expenses scandal, the Conservatives are in it up to their eyeballs as are the Liberals so in that regard you can see why people would be reluctant to vote for a major political party, but please vote for someone, spoil your paper make a protest instead of staying at home.
If you don't vote, you have no voice, so don't complain about Europe or the Political system if you didn't vote, you have no right to complain if you don't take part in the process.
Posted by Rayleen Kelly at 9:37 pm No comments:

The Race for Life
I have had one of the most enjoyable and fulfilling weekends of my life and I am still buzzing from the excitement.


Saturday was the wedding of two good friends John and Lucy, the bride was beautiful and the groom couldn't stop smiling it was a truly magical wedding and I was so pleased that they allowed us to be part of their big day. Even the obligatory dancing, which I am hopeless at, even more so when I am sober and have all of the usual inhibitions, was fantastic. The band were great and covered all types of music, even the bus ride home from Kilbirnie was a great laugh and I got home around 1am, later than I planned.

On Sunday it was an early rise for the Race for Life, and getting ready was a little more difficult than expected, as I lost the safety pins so I couldn't attach my number or my name plate on my back!

My friend Charlene picked me up and we were off to Glasgow Nautical college to meet up with the girlies. We had already had one injury before we got there one of the girls has been having joint problems as was unable to take part -doctors orders- but we soldiered on. When we got there Sharon and her trusted bum bag had spare safety pins (thank god) and a whole host of things (pens to write names in case we forgot, and well it was a Mary Poppins bag), we all got suited and booted with our numbers on the front and the names of those we wanted to run for on our backs. 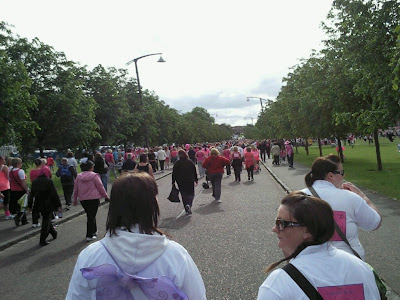 Before getting on our way we took a group photo (will put this up when I get it), When we walked towards Glasgow Green we could hear the music and the stage announcers right away,
'Welcome to Race for Life Glasgow, the biggest Race for Life in the UK, 17,500 women are taking part today ...'
On arriving I had no idea it was going to be this big an event, 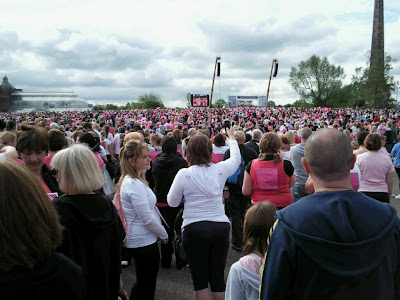 Between and 'Reach for the stars' warm up and Suzie Maguire of Real Radio breaking two microphones it was a great atmosphere. Lord Provost of Glasgow Bob Winter gave a fab speach, short and sweet and really fitting the occasion. 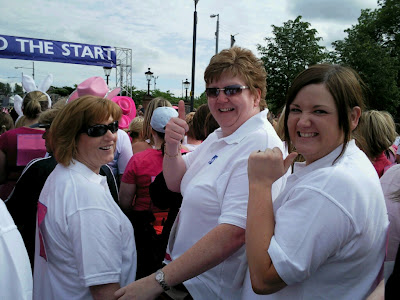 On Our way to the start line, which you had to walk to down the road and round the corner, getting ready to go (male cheerleader at the start shaking his pom poms) and we were off on a whistle tour of Glasgow, we managed to complete the course in under 1 hour and had a fantastic amount of support all the way through from the road sweepers out and about and clapping the racers on their way past, to the ordinary people lining the route and clapping and cheering.

Loads of different people taking part, with the wee white scotty dog with the pink whistle round it's neck to those suffering from cancer who were running to prove that it can be done. It is a humbling experience walking beside someone who has their own name on their back, to the family of James who were in the final stages with us, obviously a mother and sisters, you could write a book with the stories just printed on the back's of those taking part and I am sure that similar to me others will be writing about this and hoping that they touch even one person and compel them to either take part or at least sponsor us.

We crossed the finishing line to whoops and cheers and I don't think I have ever had such a sense of achievement in all my life, I know it is a small victory and it is only 5Km but crossing that line you feel as though you are doing something special and it is true the taking part is the bit that matters.

Absolutely buzzing I have still not come down from the roof yet, we got a medal and a goody bag which was totally besides the point, and better than that we raised an amazing amount on line for an excellent cause. So just in case you were waiting for us to complete please sponsor us now...

Posted by Rayleen Kelly at 9:23 pm No comments: